The enormous computing power of the GHash.IO pool sparked another debate about 51%-attacks. Pools with such a large share of the total hash rate threaten Bitcoin’s decentralized nature and make Bitcoin depend on the benevolence of the dominating pool – in this case GHash.IO. Obviously, it is not in the self-interest of miners to all mine in the same pool, as it undermines Bitcoins value. When asked, why they do so anyway, one frequent answer is “luck smoothing”. In this post, I want to dispel this argument. 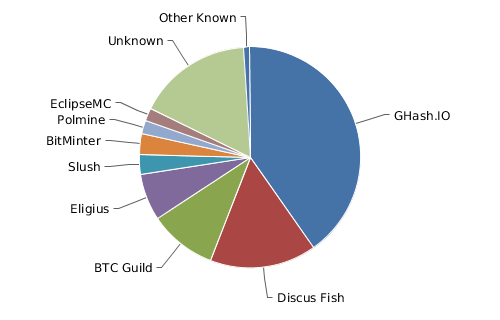 Shares of Mining Power according to blockchain.info

The following table was obtained through a Monte-Carlo simulation and shows the variance of mining returns as a function of pool size. For example, when mining in a pool that controls 50% of the computing power, you can expect a daily variance in returns of 0.6% and a monthly variance of 0.03%. Thus, you will get very smooth returns as good luck and bad luck are in balance.

Should you decide to mine in a pool that only controls 3% of the total hash rate, you will see daily fluctuations as high as 20%. In other words: when you earn 1 Bitcoin per day at average, you will often see returns below 0.8 Bitcoins or above 1.2 Bitcoin – but it can also get as low as 0 if the pool is very unlucky that day. However, when looking at the variance at a monthly level, daily fluctuations tend to cancel each other, leading to a monthly variance of 0.68%.

Let’s compare this to the variance of Bitcoin prices. Unlike the variance of mining returns which gets smaller when looking at longer periods, the variance of the exchange rate goes up. The reason for this is that mining returns do not depend on the returns of the previous day (i.e. they follow an AR(0) process), whereas today’s price builds on yesterday’s price such that changes add up over time. Thus, when looking at daily returns, mining in a 25% pool adds fluctuations of 2.4% and price changes account for another 2.2% – givnig you 4.6% in total. However, the time horizon of a miner is not (and should not be) a mere day. Electricity bills come in monthly and obtaining new hardware is a process that spans over many months. Therefore, a more realistic timeframe to look at is one month. And here, the variance of the exchange rate dwarfs the variance of mining returns. When mining in the largest pool, you will get a total variance of 49.03% in USD terms. When mining in a 3% pool, you will get a total variance of 49.68%. Wanting to optimizing such a small difference is complete nonsense.

PS: Ziepheiw did some additional calculations that also incorporate difficulty adjustments. They do not matter much. Also, this post is being discussed on reddit.